A Day in Big Valley

Shortly after LV and I were engaged Mom and Daddy sent our two kerosene cook stoves to a repair shop in Big Valley. There they would get all new parts and be repainted so they would be as good as new for the wedding.

Several months later we got a letter stating they were ready to be picked up. Daddy and Mom immediately began making plans to go pick them up. After hiring someone with a fifteen passenger van to to ensure the whole family could go along, they removed the last two seats to make room for the stoves. I thought it was rather strange that they wanted all of us to go along as usually if something like this came up Daddy would go pick it up by himself. After we got on the road it wasn't long before I sensed that we would be doing more than only pick up stoves. After we turned onto a road that I knew didn't lead to Big Valley my suspicions were confirmed.

It wasn't long before we discovered Daddy had planned a treat for us and made arrangements to get on the first tour of the day to Penn's Cave. As we all got into a boat we were ready to explore the cave. I thought it was quite interesting but still breathed a sigh of relieve when we got back safely. I much preferred being above ground.

We continued on to Big Valley where we spent the majority of the day visiting Daddy's aunts and uncles. Daddy wanted me to meet all of them before I got married. I had never realized just how many aunts and uncles he had until that day. I found most of them to be very boring people, they were friendly enough and always welcomed us into their homes. I felt a little awkward as we had to sit and visit a little before going on to the next aunt or uncle. In the one house the lady immediately wanted to give us all a glass of sweet tea. Going to the refrigerator she got several bottles of vegetable oil out and poured it into glasses. My stomach churned and I felt like gagging. I soon realized that she keeps empty vegetable oil bottles and uses them for other things, but it had made that I was no longer thirsty for anything. Watching for a chance I exchanged my full glass of tea with one of my brothers empty one. We were both happy to make the exchange.

After we left that house we went to a nearby store were Mom and Daddy announced I could pick out my wedding china. After looking at the many different patterns I selected what I thought was the prettiest. With it's pale flowers and silver trim. 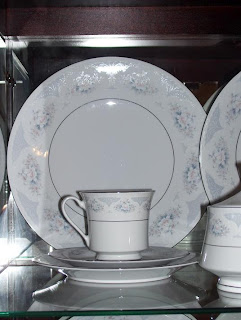 Daddy pointed out the ones with bright pink or red flowers and asked if I wouldn't rather have those. They were pretty but I preferred the soft delicate pattern I had chosen rather than the more bold pinks and reds. After paying for it we went to pick up the stoves. It had been a long full day. Somehow with the stoves being repaired and the china purchased it made the wedding seem a little closer and there was still so much to do before then.
Posted by A Joyful Chaos at 7:43 AM