Once a year we would all go to Canada to visit Grandpa Swareys and all of Daddy's brothers and sisters. It was something we all really looked forward to. Grandpas had such a cozy little house that was built beside Uncle Solomons house. Aunt Susie and Ella still lived with them. Grandma was short and plump and very cheerful. I loved visiting with her because she had a way to talk that made you feel like you were equals and could share everything that was on your mind without the fear of being secretly laughed at.

Susie would spend most of the time cleaning vigorously or sewing quilt tops. She would let me snip the threads that held the string of sewn patches but that wasn't nearly as fun as spending time with Grandma or Aunt Ella.

Ella was not your typical aunt. As a teenager she had polio and suffered devastating effects because of it. But she was always cheerful, delightfully humorous and an all around pleasure to know. A definite favorite to her nieces and nephews. She always had the way of viewing life from the perspective of the age group she was mingling with.

I couldn't wait to show baby Mahlon to her. I knew she would love him as much as I did. When we arrived everyone came out to welcome us and I wasn't disappointed at how she and Grandma fussed over Mahlon. We unloaded the van and sent the driver to a neighbor who was willing to share a room in their house for him. It wasn't long before more vans came bringing more of Daddy's brothers and their families from several different states. The noise that came with them was delightful and we cousins went to play leaving the grownups to their grownup conversations.

The day passed swiftly and the next morning brought the rest of Daddy's siblings for a family reunion. What a noisy gathering it was. The women were cooking loads of food and the men were each cranking an ice cream freezer and we cousins were having the time of our lives.

I don't remember what we had to eat except when it came time be served the ice cream. Seven of us girls approached the line of ice cream freezers where the uncles were doling out portions of all different kinds of flavors, by the time we reached the end of the line our plates were piled high.

We sat on a bench under a shade tree and started eating, but had barely made a dent in the mountains of ice cream when we were simply too full to eat another bite. We sat there in pure misery trying to eat it. Taking our plates to our mothers never crossed our minds as we had all been taught to eat everything that we had been served. Finally one of us got a bright idea.... at this point it should be brought to attention that Grandpas did not have indoor plumbing. They had a nice little building that accommodated four.

We casually walked toward the outhouse bearing our heaping plates of ice cream and hurriedly scraped it down the holes. We were ready to leave when who should appear at the door but aunt Ella. She relieved our guilt by saying, "They gave you way too much. Didn't they?" She then proceeded to collect our empty plates and took them inside to be washed. She never told anyone what we did. 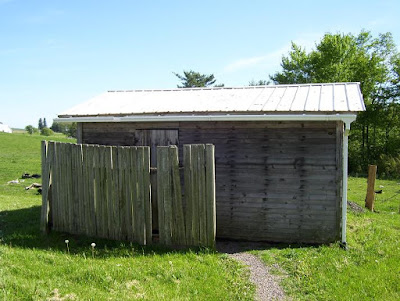