A dusting of snow finally covered some of the gray and browns we were seeing. To me, it makes the waterfall look a little  colder than usual. 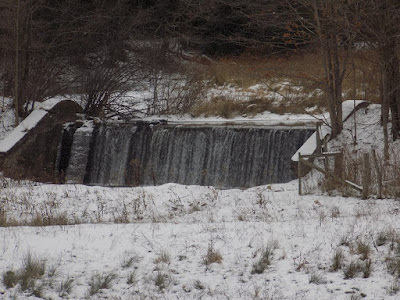 I don't think I'll ever get used to seeing the weird concoctions that Sunbeam chows down. This week's stomach churner combination was graham cracker with a liberal amount of crunchy peanut butter, and then sprinkled with chocolate chips and drizzled with mustard. 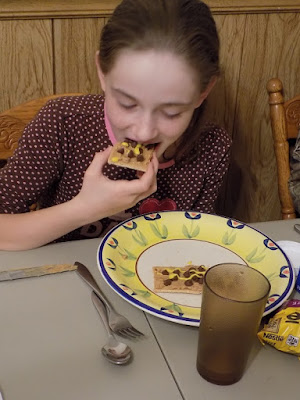 For a day we enjoyed red ornaments on our Christmas tree, before a vote to have a silver and gold year over turned my love of that splash of color. 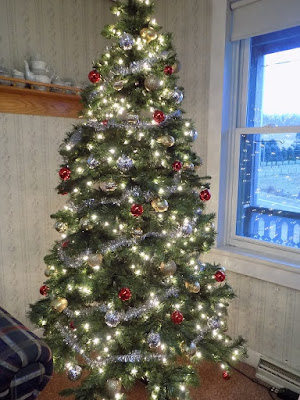 Every year we look forward to receiving a handmade Christmas card from LV's mother. Yesterday it arrived in the mail. The girls, Buddy, and I were almost ready to head out the door to their last dress rehearsal for the homeschool co-op variety show and drama. I propped the fat envelope where LV would see it when he came home and we left. I didn't think of it again as we were caught up in the hustle and bustle of preparing for our evening.
When evening arrived LV and Sailor walked in the door. I always have to smile when I see my husband approaching, (Yep, even after all these years he still makes my heart pitter patter.) this time however there was a little something extra ... he sparkled. There were pieces of glitter stuck to his face and when he tried to brush it off a few more pieces got stuck.
It wasn't until we got home and I saw the glitter filled Christmas card his mother had made that we put two and two together. Apparently when he opened the envelope glitter spilled onto his clothes and hands. Which means he's not producing glitter after all. 😉 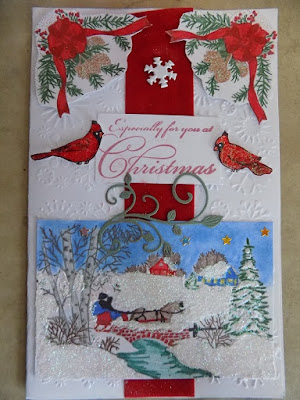