Sailor is quite the chef and when lunch time rolls around he can often be found trying his hand at creating some new kind of dish. He leaves the baking for the girls and they seem to keep a steady stream of desserts flowing. 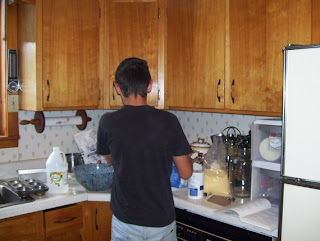 Recently he decided to try something different and make cornbread for lunch even though that meant using a recipe book. After hearing strange muttering noises coming from the kitchen I went to investigate and found him calculating how to increase the recipe because he had accidently added too much sugar and was now trying to fit the rest of the recipe around his mistake.
We now have enough cornbread to feed a small army.