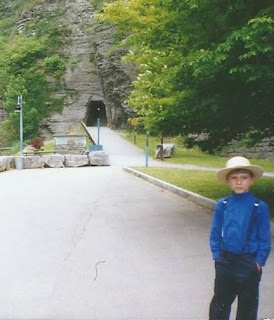 Memory after memory has been flooding my mind this past week of one of the kindest, most tender hearted young boys I have ever known. My brother Mahlon.

I don't have many pictures, but I treasure the ones I do have. In this picture Mahlon is nine years old. We were on a family vacation and he was waiting on the rest of the family as we were getting ready to walk through the Watkins Glen Gorge. Our driver took the picture and gave us a copy later.

At nine, Mahlon loved the outdoors and animals. Animals seemed to have a special connection with him. He could talk to them, and they'd listen, doing what he asked. Not only our farm animals, but wild animals as well.

One of our favorite Mahlon/animal memories are when we went out to the barn one day and a cat came in carrying a terrified chipmunk. Mahlon was horrified and told her to drop it right away, which she did. "Run, run," Mahlon yelled at the chipmunk, and run it did, straight toward him, up his pant legs, up over his coat, and with a final leap it perched on top of his hat where Mahlon guarded it safely before taking it outside and letting it go.

I can't help but think of the similarities between that happening and his life later on where he battled with some serious things, and how he is safe in the arms of Jesus now, and free from all that.
Posted by A Joyful Chaos at 11:25 AM