1. What's something in your house you'd like to get rid of but can't?

I'd love to get rid of the carpeted floors, but I can't.

If I were ever to build a new house there wouldn't be any carpeting involved. I would much rather sweep and mop, than vacuum. And know my floors are clean. I never feel as if my floors are clean even though they get vacuumed at least once a day, often more.

2. When is the last time you experienced a sense of nostalgia? Elaborate.

Probably at my brother's wedding. Hearing all the old Amish wedding songs. (You can listen to a snippet of it here.) Seeing the same bishop who married us, marry them. It brought back waves of nostalgia and emotions.

3. You're only allowed three apps on your smart phone or tablet...which three do you keep?

I only downloaded two apps. Instagram which I happen to really like. You can find me here. The second app is Inkpad. I love it to be able to take quick notes and reminders for myself. The third app came preinstalled, but it's my favorite. The camera.

4. July 11th is National Blueberry Muffin Day. Who knew? Do you like blueberry muffins? If you were going to have a muffin would blueberry be your choice? What's the last thing you baked?

Muffins aren't really my thing, having had way too many of those dry-ish crumbly things as a child. If I had to eat a muffin, a blueberry one would be my choice.

The last thing I baked was a Stromboli. The last thing that was baked in my kitchen were these delicious blueberry cream cheese treats. Rosie Mae and Steven made them. 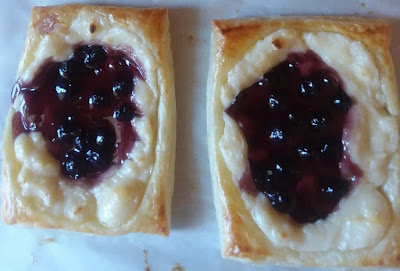 5. What's the biggest way you've changed since you were a child? In what way are you still the same?

One of the biggest ways I've changed is by no longer being Amish. Other less blatantly obvious changes are that I'm less shy, less agile, more confident, and I no longer have to be on a crazy hard diet.

A way that I'm still the same. I still love, love, love the feel of a pen in my hand and a new notebook ready and waiting to be filled.

6. Insert your own random thought here.

Last week there was a run away garbage truck down the mountain. It ended badly. The driver survived, but the truck did not. As badly as I feel for the driver and his helper guys that had been hanging onto the back of the truck ... I am not enjoying the growing pile of garbage out by the road that is still waiting to be picked up.
Posted by A Joyful Chaos at 6:45 AM