Thanks to PW I finally managed to do something that I had been trying for the past eleven years.

My mother-in-law made really good ones but I was unable to recreate her version and so every year my husband would request a pan full of her apple dumplings instead of a cake for his birthday. Since we were moving and I knew she would no longer be able to provide an apple dumpling filled birthday I went on a search to find some that are equally as good. I found PW's version on a friends blog and after reading her rave review I knew I have to try them too.

The first pan full I followed the recipe exactly, but we all agreed it had way too much butter for our taste and so with a little tweaking here is our version of PW's apple dumplings. They are so good that it's hard to have any leftovers and my husband gave the highest form of praise by saying they are even better than his mother's. What more can I say? They were promptly filed into the keeper file and we have enjoyed them numerous times since then. 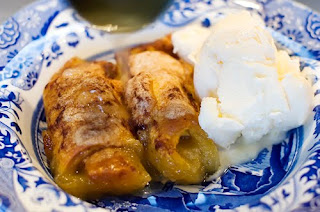 Peels and core the apples and then cut them each into 8 slices.
Roll each apple slice into a crescent roll. Place in a 9x13 buttered pan. Melt butter, then add sugar, stir. Add the water and vanilla, stir and pour entire mixture over apples. Pour Mountain Dew around the edges of the pan. Sprinkle the top with cinnamon and bake at 350 for 40 minutes. Serve with ice cream (if you want) and sprinkle some of the delicious sauce from the pan over it all.
Posted by A Joyful Chaos at 6:23 PM

Email ThisBlogThis!Share to TwitterShare to FacebookShare to Pinterest
Labels: Recipe